Khabarovsk Krai is located in the Far East, from the east it is washed by the Sea of Okhotsk and the Sea of Japan. It borders on the south with the People’s Republic of China, Primorsky Krai, on the southwest-with the Jewish Autonomous Region, on the west — with the Amur Region, on the northwest and north — with the Republic of Sakha (Yakutia), on the northeast-with the Magadan Region.

Deposits of gold, platinum, precious and non-ferrous metals. The main fishing areas for fishing enterprises of the Khabarovsk Territory are the Sea of Okhotsk, the Bering Sea, the Sea of Japan and the Amur River.

The Trans-Siberian and Baikal-Amur railway lines pass through the territory. The final point of BAM-the port of Vanino-is the point of the Vanino-Kholmsk ferry crossing to Sakhalin. The transport axis is the Amur River with the ports of Khabarovsk, Komsomolsk-on-Amur and Nikolaevsk-on-Amur. Khabarovsk Airport is the most important transfer hub for domestic and international air transport in the entire Asian part of Russia.

There are hundreds of memorable places in the region. Elements of the ancient culture of the Stone and Iron Ages have been preserved in the remains of settlements on the banks of the Amur Bayou and the Amur River, in the petroglyphs of the villages of Sikachi-Alyan, Kiya and Sheremetyevo. 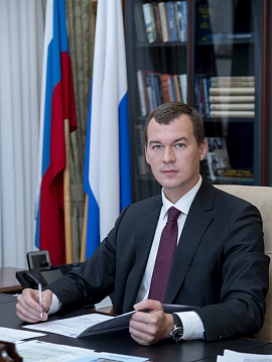